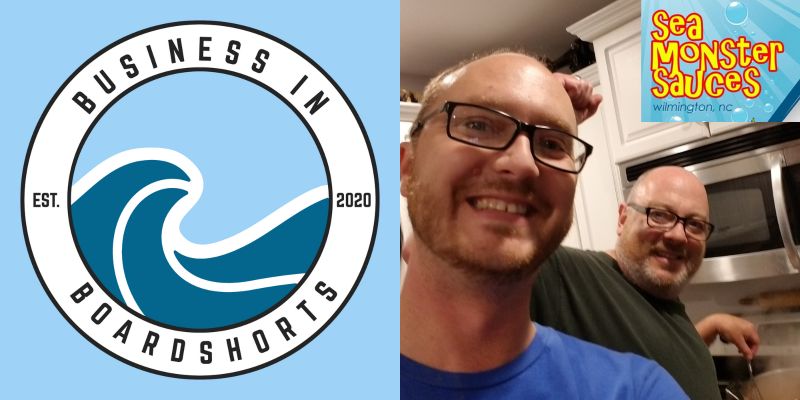 Intro (Guest 1): Every one equates entrepreneurship with the hustle and art that it takes. It certainly does. Underrated art is the boring stuff, the accounting, the design, and the recipe innovation, the stuff that makes all the front end product possible.

Intro (Host): Welcome back, or welcome to the Business in Boardshorts Podcast. Today’s guests are Brian and Sean from Wilmington, North Carolina. They’re the creators of Sea Monster Sauces, home of the surfer slapping sauce that hits shelves in 2019. Hey guys, welcome to the show.

Guest 1: Hey, thanks. Thank you. Great to be here.

Host: Yes, thanks for joining me. So can you give the listeners the vibe of Wilmington for those that haven’t visited before.

Guest 1: Yeah, the current vibe is very much a foodie kind of town lately. Everyone’s digging artists in homemade stuff. A lot of local burger shops, taco joints are popping up. And ourselves, we found a need for a local sauce company, in particular, our surface Latin salsa, winging barbecue. And it’s been fantastic. The people in Wilmington have been very receptive of it. They’re buying like crazy. We’re in a huge retail footprint in the city mobile 50 locations. And to go back to the Wilmington vibe, it’s — it’s a little bit scary, like everywhere else right now. But we’re still managing to get the word out about the sauce. It is a — it’s a tourist and college town a lot of the times, but that’s kind of what we liked about it, because we can get the — our products out to brand new people and young people at the same time.

Host: Sure, yeah, that makes a lot of sense. Have you both — you both born and raised in Wellington?

Guest 1: I was a member of a military family. And I basically came to Wilmington to go to you and CW about 25 years ago. I’m a 25 year, local at this point.

Guest 2: And I was actually born and raised in Massachusetts, and moved to North Carolina about 20 years ago, and I’ve been in Wilmington for eight. And I never want to live anywhere else saying here.

Host: What do you love about it?

Host: Sounds good, man. I think I would fit right in. Talk about just the – this — like where did the sauce come from? And how like the backstory the beginning part of it all?

Guest 2: Well, the beginning is actually some time during 1989 when I was working on a restaurant on Cape Cod, and created a sauce to put on chicken wings and ribs and just kind of played around with it, made it maybe once every year, once every couple years just for backyard barbecues and things. I never really thought much about it. I thought it would be nice to sell it but never really got the chance. And then, about two years ago, my son and his wife bought a restaurant that had wings on the menu. And we added our sauce to their wings and people loved it. And he started making pulled pork barbecue with my sauce and people loved it. And after hearing, “Hey, can we buy this sauce for about six months?” I decided it was time to make it available. And we took the first steps. We’ve had a few expensive and painful lessons we’ve learned along the way. But eventually we got got the ship off brand off the ground. And it’s really going well now.

Host: Would you mind sharing, you know, what’s one of those stories kind of what like, a big struggle that you were able to turn around?

Guest 3: Ah, well the thing is, my sauce is very complex. It’s not just a really simple thing to duplicate. And once we decided to get it into mass production it — it took several tries and packers to finally dial it in and get it the way it was supposed to be. Before we were happy enough to say okay, let’s do it. It took a while. It is definitely tricky. It’s not a — it’s not your everyday sauce, which hopefully people will all realize someday.

Host: Yeah, can you explain to the listeners, what does it taste like?

Guest 1: This sauce is — and we count it everywhere as a sweet tangy heat. It’s got — in that order, it becomes sweet on your tongue, and then tangy it’s orange juice kicks in and the vinegar and then the very back end. We can almost find it perfectly well before tasting it. You get a slap of heat which is normally go like that and then people laugh and they spill it on their shirt. It is — it is exactly that a sweet tangy heat and very much in the North Carolina style barbecue sauce because it does have a heavy vinegar style to it. And which makes it fantastic on both pork. It’s a great complement to fried shrimp and fish tacos and I dip my French fries in it. It is an extremely versatile condiment, and there was a salt.

Guest 2: Because in the Bloody Mary’s.

Guest 1: I’ve been known to do Bloody Mary’s with the surface slapping songs. Yes,

Host: That’s impressive. What would you say is the most unique thing that you’ve heard of somebody slap it on?

Guest 1: We had a gentleman come up at one of our tastings not too long ago. He is a fisherman and he brought over some — some raw oysters he caught the previous day, and he was all dressed up in his fishing guard. And he just brought a chafer and five or six raw oysters in North Carolina and shuffled right in front of me said, “Give me a slap that sauce”. Slapping with the sauce and he shot one for me. I slap myself in the sauce and we both didn’t always just shoot a real quick right there on the spot.

Guest 1: Another one is it appears extremely well with seafood. So we’ve heard some strange seafood stories with it, including octopus and muscles. Specifically black ink muscles is a one that sticks in my head for some reason. I know they existed, but apparently it’s good on blacking muscles.

Guest 2: And we have a neighboring vendor that we sit next to at the freedom — at the farmers markets. He is a beekeeper. Sells homemade honey fresh, different forms of honey. And he says that he puts it on anything that they eat that is leftovers. Does not matter what it is. If it’s leftover from the other day, he just puts my sauce on it and eats it. And he doesn’t care what it is.

Guest 1: I mean, if that doesn’t say versatile, I don’t know what does.

Ad-Break: Hey, there it’s CT. I’m interrupting my own show. Because I’m now open to new clients. I have a waitlist for website design and marketing strategy sessions. If you’re trying to throw in your marketing dollars down the drain, and want a website that actually drives new business, let’s hop on a call. You can book a free hour with me at tkaupp.com/bib, that’s ctkaupp.com/bib.

Host: I have a question to go back a little bit when you were saying that you were getting into mass production and it was hard to get acquired right at first, how long were you just local to when you were like hey, we got to mass produce it?

Guest 2: We didn’t really start selling it until we started mass producing it. Sauce needs to be prepared in an FDA approved kitchen. So at the time, I was just making it at my son’s restaurant for them to use. It wasn’t available in bottles or anything like that. So during the time that we would go through all that time waiting for the bottle or to dial it in and get us ready to go. I continue to cook it at my son’s restaurant so that they could use it. And then when we finally got it officially bottled November 7 2019 that’s when we started selling it and made it public.

Host: And I saw on your website that you have some new sauces coming spring of 2021, is still on point?

Host: To hit on the entrepreneurship angle. What do you guys think is an underrated trait an entrepreneur?

Guest 1: Everyone equates entrepreneurship with the hustle and art that it takes. It certainly does. Underrated art is the boring stuff. The accounting and the design and the recipe innovation. The stuff that makes all the front end product possible is the most underrated part, because without a business background formal teaching, you are learning every single day on how to run a business and most entrepreneurs don’t have it.

Host: Yeah, the 95% of things that — that the end user doesn’t actually see. I love that. Okay, I’ll get you on this, this last two questions. What is the best business advice you’ve ever received?

Guest 1: Don’t do anything that will get you fired or get you sued. That’s been said multiple times actually. I’m not sure why they just chose to say those words and don’t ever do those things. But it’s always rang true. I don’t want anything that will jeopardise the future of your business. You can make a lot of small mistakes along the way. But don’t — don’t do anything stupid.
Host: How about the best life advice?

Guest 2: Best life advice definitely came from my parents. And it was just learning by observation, which was how to treat people and animals. We see a lot of people face to face and interact with them at farmer’s markets and different places like that. And you really need to have that personality where someone feels comfortable talking to you, and treat people who expect we’re fun. People enjoy visiting our setups on our booths and trying our stuff because we were good people, we talked to, and we definitely love animals. And I think I don’t trust anybody that doesn’t love animals.

Host: Where can my listeners check you guys out online and purchase your sauce?

Guest 1: We are at seamonstersauces.com. We’re also available on Etsy, Amazon, and Tundra. And we are of course on all social platforms. We had a great time on social. We don’t take that part of the business seriously. It’s just the sauce that’s serious. Everything you see online just — is just trying to make you laugh and interact with us but the sauces serious but our are online, not so much.

Host: I love that. Thank you very much for coming on the show.

Guest 2: Awesome. Thanks for having us. It’s great.

Overview: Sea Monster Sauces of Wilmington, NC launched Surfer Slappin! Sauce in November 2019. This unique & versatile sauce tantalizes your taste buds with LAYERS of FLAVOR, and a SLAP of HEAT at the end. Their 31 year old family recipe is now available to be “Slapped” on everything from rings & ribs, shrimp, pulled pork & baked chicken, to omelets, burgers, salmon, french fries, BBQ pizza and fish tacos.